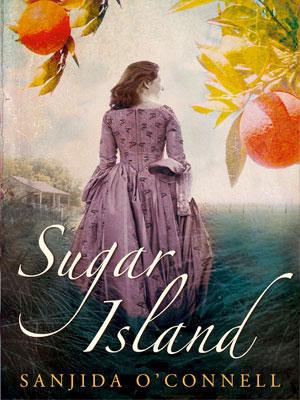 Sanjida’s latest novel, is out now, published by John Murray.

Emily Harris, a glamorous young English actress, arrives in America in 1859. There she meets and falls in love with a charming southern gentleman, Charles Earl Brook. But shortly after they are married, Emily discovers that Charles has kept a terrible secret from her. The Brooks are slave-owners and Emily is forced to travel to the deep south where Charles keeps seven hundred men, women and children in abject poverty.

I have worked every day through dew and damp, and sand and heat, and done good work; but oh, missis, me old and broken now, no tongue can tell how much I suffer.

As civil war breaks out, Emily’s world becomes increasingly dangerous and she realises that her growing friendship with the slaves could cost her everything she has ever loved.

Since you left I still see you everywhere, on the stairs, on the veranda. Sometimes I catch a glimpse of you through the reeds. I come across you on horseback in the woods, I see you standing on the beach looking out to sea. I have always loved you.

The Bristol Evening Post interviewed me. You can read it here.

Read an interview with me in the Yorkshire Post

BBC Bristol interviewed me. You can listen again here.

City Am gives Sugar Island a 4* review: ‘Completely absorbing…a surprise delight that will please romantics with a conscience hugely.’

The Times says, ‘gripping, entertaining and entirely on the side of the angels’

The Oxford Times says, ‘O’Connell writes with passion. A well-researched and sensitive story evoking a ‘twisted version of paradise’.’

Amazon review: ‘Based on a true story the detail is as harrowing as it is authentic. The beauty of the island provides a stark contrast to the horrors being perpetuated on the plantation. The colours, textures, scents and sounds convey a real sense of place and combine to underline the terrible dichotomy of Emily’s life there. This novel is beautifully written and, though harrowing to read, is ultimately rewarding.’

5* ‘Loved this book- having lived in the Southern US I was familiar with some of the places depicted and this made the book come alive for me. A difficult story to read at times due to the elements of truth within it, but for me it’s good reminder of where we no longer want to be.’ Rebecca Hemshall

4* ‘I loved it. And then to find that it was sort of based on a true person made it even more special – that someone was brave enough to stand up to her husband and help the slaves like she did was incredible. So if you like books set in Deep South in the time of the American Civil War – definitely give this book a read….’ Kathy

4* ‘Although this is a hard book to read in terms of subject matter and the infuriating opinions of those in favour of slavery this book is brilliantly written and the plot and characters held my interest through to the very end.’ Jeni

What value did Emily place on being a ‘celebrity’?

What were Emily’s real feelings about Charles Earl Brook? Was she in love with him?

Emily is used to being independent and a woman of means, whose opinions are respected. How different is this to the situation in which she finds herself on St Simons Island?

How modern a woman was Emily for the time?

How did you feel about the depiction of slavery on St Simons Island?

What paradoxes are there in the relationship between the slaves and the white Americans?

What types of slavery are depicted in the novel?

What do you believe Virginie’s opinion is of Emily and Charles?

In what way are Emily and Virginie’s characters similar and different?

What could Emily have done differently?

What are the novel’s leit motifs?

What were the key ways in which you feel the real story of Fanny Kemble was altered in the novel?

Do you think the author should have changed the real story of Fanny Kemble and Pierce Butler as significantly as she did to tell the fictitious story?