CRIMEFEST 2015 – The most powerful thing a writer can do is to get a character to lie to herself.

This year I attended Crimefest, a literary event for crime fiction and thriller readers and writers. Here’s a brief snippet of what went on…

As a mixed-race writer, I’m acutely aware of skin colour. There’s always someone in my novels who isn’t white – Levi in my new thriller, Bone by Bone, is the key mixed-race character. I describe everyone by their skin colour and ethnicity.

So it was interesting listening to authors on a Crimefest panel – ‘Writing as the Other’ – discussing characters who are somewhat different to them. These authors were all caucasian and a similar age but wrote about people of different races, sexes and ages to themselves. Leigh Russell writes from the point of view of a young black man, Ian Peterson; MP Wright has a main protagonist, JT Ellington, who’s Barbadian; MR Hall is a 40-something divorced woman, coroner Jenny Cooper, in his crime fiction and MJ McGrath’s hero is an Inuit woman.

All the writers said they felt entitled to write about anyone they chose and they did so by using their imagination, doing plenty of research and being sympathetic to their character. For instance, Matthew Hall grew up in an all-female household but he does get his wife to check practical details (she objects to him writing ‘blouse’ for shirt!). Mark Wright worked with people from the Caribbean in his former job, and Melanie McGrath travelled across the Arctic with the woman who inspired her protagonist, Edie Kiglatuk.

All the writers felt that, in spite of superficial appearances, they shared core values with their key characters, which, let’s hope, they don’t share with the serial killers, murderers and drunk detectives who also feature quite heavily in crime fiction.

I start with a good opening scene and a great location and then I figure it out as I go along.

What’s the difference between crime fiction, thrillers and psychological thrillers?

I went to a couple of panels on genre at Crimefest 2015. Typically in crime fiction, the worst has already happened: the novel opens with a body and the plot is an attempt to find out what happened, how and why. In a thriller, the ‘bad thing’ hasn’t happened. The novel starts with a good situation that worsens. 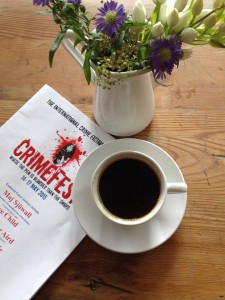 A thriller usually features professional operatives (think spies, MI6, hired assassins) and has a global reach, whereas a psychological thriller has normal people and a domestic setting. In a thriller, there is a clear and present danger; in a psychological thriller, you don’t know what the danger is or if it even really exists. It might all be in the protagonist’s head, as Sabine Durrant, author of Remember Me This Way, suggests.

My thriller, which comes out next year – Bone by Bone – and the one I’m writing now, are domestic noir, which I like better as a description of the psychological thriller genre. As the title suggests, the setting is domestic. My novel doesn’t start on a happy note, but the ‘bad thing’ hasn’t happened yet. One tiny mistake leads to another so that there’s an escalation of tension, a heightened sense of claustrophobia and you know that something terrible might happen!

Mind you, as it’s set in Bristol, around Halloween, I’d like to create a whole new sub-genre called Bristol noir!

'In the depth of winter, I finally learned that w