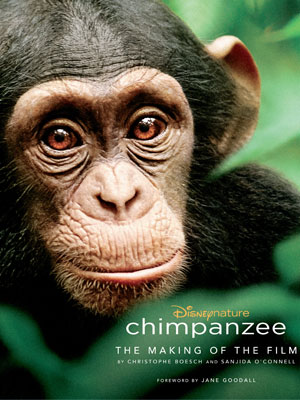 Chimpanzee: The Making of the Film

Chimpanzee: The Making of the Film
Sanjida O’Connell and Christophe Boesch, with a forward by Jane Goodall

Chimpanzees are our closest living relatives in the animal kingdom. They share 98 percent of our genetic makeup; yet despite our many commonalities, some aspects of chimp behavior remain a mystery to us. Biologists studying chimpanzees have made significant discoveries about our primate cousins, but the bulk of that knowledge has been gained relatively recently. We still have much to learn, and the need to learn is great; chimpanzees are highly endangered in the wild, and some primatologists believe that they are at the brink of extinction.

In the hope that increased awareness will brighten the future for these great apes, Disneynature has released a film following in the footsteps of Earth, Oceans, and African Cats. That film is Chimpanzee. Chimpanzee: The Making of the Film chronicles the entire process of the movie’s creation, from the idea that the directors pitched to Disneynature, to the challenging filming that took place deep in the heart of Africa. Using their own words, the filmmakers discuss ground lost and ground won – both in the context of the chimpanzees’ territory wars, and the progress of the film itself.

The trailer for the movie, Chimpanzee, is out now.

4* ‘This book is interesting because it is not only about chimpanzees (where they live, their behavior and the movie), but it is about the making of the movie Chimpanzee as well. This book is right for animal lovers or readers interested in how the documentary was made.’ Kellee

'In the depth of winter, I finally learned that w