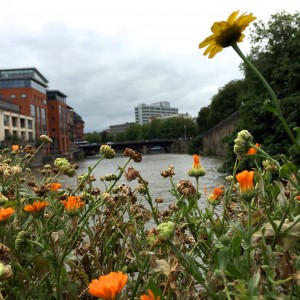 SEEDS OF CHANGE – Many of our most beautiful plants have come from far-flung lands, brought to us by intrepid Victorian explorers. It was their dare-devil stories that inspired me to write my third novel, The Naked Name of Love, about a Jesuit priest in pursuit of a rare lily in Outer Mongolia.

But I never considered that many of our most brilliant botanical finds made their way here in the hulls of ships as ballast. Ballast – the mud used to weigh down trading vessels when they docked – was picked up from countries all over the world and then dumped near Bristol’s Floating Harbour. And so we ended up with seeds from Africa, Asia and the Mediterranean sprouting here in the south-west. Artist, Maria Thereza Alves, has created a a floral tribute to our city’s trading history: on an old concrete barge floating off Castle Park in the heart of the city, she’s planted seeds that reflect the global routes travelled by Bristol merchants. 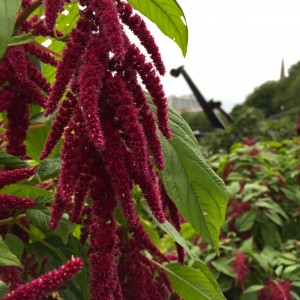 It’s a collaborative venture with the University of Bristol’s Botanic Garden and the Arnolfini. I visited recently – such an amazing contrast between the city-scape and our exotic heritage! Glorious magenta amaranth has almost taken over – originally from Africa, India and South America, it produces a dye and the seeds are high in protein. Corn marigolds bloom at the edges of the ship, brought here from Europe – and figs from Asia are starting to fruit. My five-year-old loved the squirting cucumbers, whose seed pods exploded pretty spectacularly over some of the visitors. Nigella and flax have stopped flowering; instead their alien-like seed capsules littered the boat.

Bristol – as I discovered when I was researching my non-fiction book, Sugar: The Grass that Changed the World, was one of the two leading ports in the slave trade. Replacing a cargo of human beings on one leg of the triangular route, resulted in a large amount of ballast. It’s bitter-sweet to think that not just parts of our city, but our flowers too, are a legacy of this heritage.

I hope you get a chance to see the Floating Seed Ballast boat – let me know what you think!