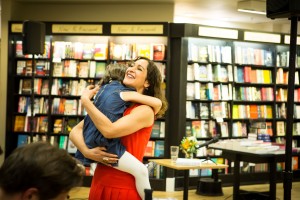 Vanessa’s field work is in Namibia, and she shuttled Laura back and forth between Africa and London as a child, so she could continue to have a career in the sciences – and see her daughter. Laura is bitterly resentful; as a result, she now puts Autumn’s needs before her own. Unlike her mother, though, she doesn’t have the confidence or the inner-strength to help her child properly – because, thanks to her peripatetic childhood, she was bullied as a girl too. If she just asked her mum for help with Autumn…!

The first part of Laura’s healing process occurs when her mother describes how awful she found it, leaving baby Laura with a Namibian man, so she could carry on studying. Laura hadn’t realised she’d mattered so much to her mum, who she thinks of as completely career-driven. But then, as so often happens between mothers and daughters, Vanessa says something that Laura misconstrues, and she turns away from her mother, deciding not to ask for her help. Autumn’s relationship is similarly complicated, not just with her mother, but with her grandmother too.

She could already feel the dryness in her throat, the catch in her voice, when she’d have to stand up in class and tell everyone what her grandparents did. After the other kids read out their work on grannies who baked them squidgy chocolate chip cookies, she could imagine how the others would look at her when she talked about Grandmother Vanessa who strode through the desert with her binoculars, counting kudu.

One of the books I read for research on this topic is Deborah Tannen’s You’re Wearing That? which gives some eye-watering accounts of conversations between mothers and daughters. As Tannen says:

The smallest remark can bring into focus the biggest question that hovers over nearly all conversations between mothers and daughters: Do you see me for who I am? And is who I am okay? When…the answer implies there’s something wrong with what you’re doing, daughters can feel the ground on which they stand begin to tremble.

Recently, I read a gentler interpretation of mothers and daughters in the brilliant book, Before the Fall by Noah Hawley:

You bring a child into this fractious, chaotic world out of the heat of your womb, and then spend the next ten years walking beside them while they figure out how to be a person.

I hope Laura and Autumn learn to walk companionably alongside each other for the next decade.

Thank you to Dave at espresso coco, who originally ran this as a guest post.

1 thought on “Mothers & Daughters I”