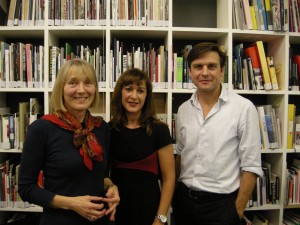 Patricia’s characters developed as she wrote and got to know them better, particularly Bea, the midwife of the title – she suddenly realised after she’d started that Bea had an identical twin, for instance! Once she’d finished the book, Patricia went back to the beginning, read the dialogue out loud and corrected how Bea and other characters spoke now that she knew what they would or would not say.

Both of us write a lot of dialogue and think it is important in conveying the character, in terms of how that person would have phrased their sentences as well as what they would have said. I, however, perhaps because of my background in psychology, specifically Theory of Mind, think that what my character is thinking, what other characters think about her or think about what she’s thinking, are more important! 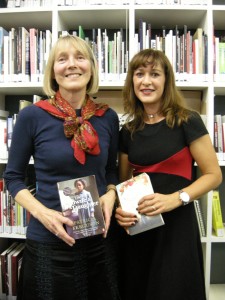 None of the characters in our novels are based on us or on anyone we know, but clearly writers do use what and who they know and alter it with imagination, factual research and observation.

Interestingly, although we have a good idea of our key character’s minds, Patricia only sees her protagonists as a blur. I see mine more clearly, but not as sharply as a real person. This is perhaps because we’re operating from the inside out – thinking, feeling, and perceiving the world as our characters might, not as a bystander observing them. For minor characters – in my case, the slaves in Sugar Island – we both used images of actors we found on the internet!

The most startling question of the evening from a member of the audience was whether we ever imagined what animal our characters might be?! I immediately had an image of a panther for Emily! Neither of us does: Patricia says that she thinks about what their shoes would be like and what might be in their pockets, both of which sound like interesting tips.

I spend a long time working on my key characters: I think about their appearance, their height, weight, shape, mannerisms, where they grew up, who their parents, siblings and friends are, how they were treated in childhood and how that has shaped the person they have become, where they were brought up, what period in history they live in, what their culture, religion, core beliefs and values are, how others perceive them and how they might reveal their true selves and change under pressure. Only when they are fully realised do I begin the novel. This is not to say that they don’t grow, develop or surprise me as I’m writing!

previousEditing my Novels
nextWorking with a freelance editor